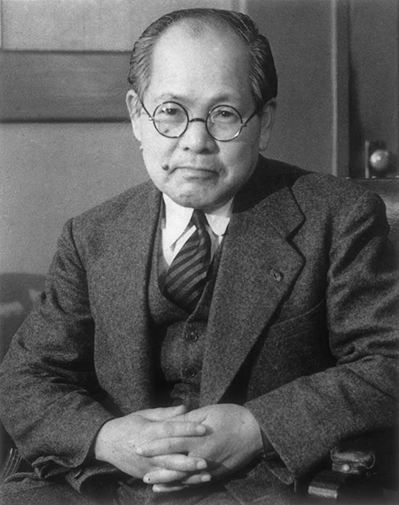 Yoshio Nishina, referred to in Japan as the Father of Modern Physics, is well known for his theoretical work on the Klein-Nishina formula, which was done with Oskar Klein in the 6 years he spent in Copenhagen under Niels Bohr during the great era of the development of quantum physics. Nishina returned to Tokyo in 1929, and started to build up experimental and theoretical groups at RIKEN. His achievements there were many and great:

(1) encouraging Hideki Yukawa and Sin-itiro Tomonaga to tackle a new frontier of physics, leading eventually to their making breakthroughs in fundamental theoretical physics that won them Nobel prizes;

(2) the discovery of “mesotrons” (the name for Yukawa particles at that time, now called muons) in 1937, which was published in Phys. Rev., parallel to the well known two American groups (Neddremyer-Anderson and Street-Stevenson);

(3) construction of small and large cyclotrons and subsequent discoveries of an important radioisotope 237U and of symmetric fission phenomena by fast neutron irradiation of uranium (1939 – 40), published in Phys. Rev. and Nature;

(4) creation of a new style of research institute, open to external reseachers, an idea inherited from Copenhagen.

At the end of World-War-II his laboratory was severely damaged, and also his cyclotrons were destroyed and thrown into Tokyo Bay right after the end of the war. Nishina devoted all his strength to re-establishing his scientic activities from scratch, but passed away in 1951 with many unfinished attempts left behind. We can say that what Japan is now owes a great deal to Nishina’s major contributions to science and the scientic community.